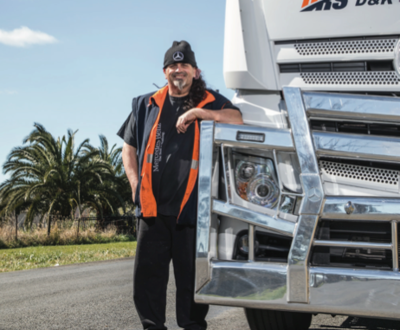 Manzo, who works for D and K Scott, delivers dump truck and loader tyres from Port Botany to mines in the Hunter Valley. The truck tows a custom trailer set developed for the monster tyres that measure up to 4.2 metres tall and 2 metres wide.

These aren’t any old tyres, no Bob Jane All Rounders here. They feature GPS sensors that are used to monitor exactly how many times they turn; like a kind of tyre odometer.

They also feature a soft interior layer that goes hard, and effectively seals a hole, when exposed to the atmosphere.

They are not cheap either and many of the big ones each cost more than a Ford Ranger Wildtrack. Still when you consider the need for absolute maximum productivity on a busy mine site, it makes sense to use the best possible gear.

The Actros also has a decent amount of technology, which is designed to maximize efficiency, boost safety and make life easier for the driver.

The new Actros features two new iPad-style display screens on the dashboard, replacing the centre screen and speedo and tacho cluster, which Mercedes-Benz calls the Multi-media Cockpit. They are super-crisp and look very similar to the type of screen you get in fancy prestige cars that have the same big badge on the nose.

The D and K Scott Actros is one of the first on the road with the MirrorCam system, which replaces big side-mounted mirrors with small camera wings and displays that mount inside the cab on the A-pillars.

MirrorCam has been designed to remove a huge blind-spot in the driver’s view and can also reduce noise and save fuel.

Mercedes-Benz undestands that a change like this will be welcomed by some and shunned by others, so it is keen to stress that the MirrorCam system is entirely optional.

Manzo, 47, is a big fan of MirrorCam, especially when backing into the yard on an angle.

“I have been driving a B-Double driver since the 1990s when you turn them when backing you lose sight of the back of the trailer,” he said.

“I get better visibility to the back of the rear trailer with MirrorCam because I always have sight of it when I am backing it in. I reckon this is great,” he says.

Manzo said it took him a little while to get used to the new system, but will be ordering in them on the next Benzes they buy.

Manzo says the digital mirrors are also better in bad weather conditions: “They don’t fog up and the rain doesn’t sit on them,” he says.

Safety gear that comes standard with the Actros includes the radar system that can automatically brake in an emergency and even detect and fully brake for pedestrians as well as lane departure warning and adaptive cruise control.

Manzo’s boss and D and K Scott Transport Managing Director, Darren Scott, had safety on his mind when he purchased the truck.

“We are going out to the mines, where safety is paramount, so it is especially important that we have the safest equipment available,” Scott said.