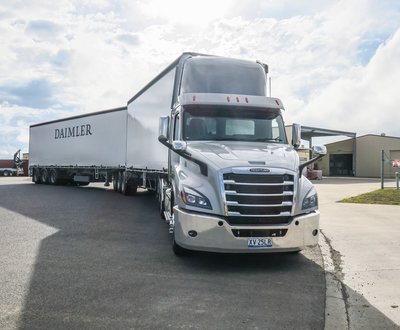 The Cascadia is a totally new truck on the Australian market and sees the first appearance of the full Daimler suite of systems, and their utilisation, from a US point of view.

The Freightliner Cascadia has been an enigma for some time. In the past, Freightliner would develop a truck for the US truck market and then make some adaptations to suit Australia, meaning it would end up being launched here a couple of years later.

On the other hand, the first Cascadia came out in the US in 2007, but didn’t make it to Australia until late 2019. This is clearly a very different truck both for Freightliner and for Australia. This is the model which helped Freightliner regain number one status in the US heavy duty market, and bring the brand to the point where it completely dominates heavy duty truck sales Stateside.

It is clearly something different. It was said to be too wide and too difficult to change to right hand drive in the early years. At the same time as it was cleaning up in the US, with consistent low fuel consumption results, from excellent aerodynamic styling, driving sales.

The concept had been simple, Daimler had decided to design all of its major components at a global level and then adapt to the various market into which it sold around the world. The Cascadia would have the DD series of Detroit engines fitted, with the AMT which had been so successful for Mercedes Benz in Europe behind it. Drive and steer axles also came out of the Detroit plant, although they were also similar to those in the Benz.

Daimler was also developing a sophisticated electronic platform with all of the latest safety bells and whistles, alongside diagnostics and other functions connected back to base at all times. The concept saw Daimler develop global solutions to be packaged and sold regionally.

The truck we now have on sale in Australia is the third iteration of the Cascadia, released in the US a couple of years ago, but the first to be developed with right hand drive in mind. This aspect of the design is obvious when climbing up into the truck – the expected lack of space in the foot well for the driver’s left foot is not an issue here.

It is good to see a truck coming out of North America which is had some genuine design input. The sophistication of design is obvious on the production line where these trucks are made in North Carolina. The complex panels are placed together by a set of robots and automatically welded into place to form a strong and complete hole. This is very different to the way cabins were built on US production lines in the past, with teams of workers riveting sheets of aluminium into place on a frame over a much longer period of time.

Walking up to the new Cascadia, the eye is drawn to the clean lines of the aerodynamic design. Within the typical US prime mover silhouette there is a smoothness to the shape, indicating how much work has gone into this design in the wind tunnel at the Freightliner headquarters in Portland, Oregon.

The level of sophistication and complexity of design which goes into this truck is not particularly obvious from the driver’s seat after you climb in. The layout looks similar to what one would expect from any North American prime mover.

There is a clue in the LCD screen on the dashboard which provides all the driver information required. The driver also has the steering wheel with plenty of buttons on either side, which is now used across the Daimler truck range.

The information screen directly in front of the driver, between the tachometer and speedometer is relatively small, but has been very well designed. Using the buttons on the steering wheel, the driver can scroll through a number of different pages and get the kind of information they require, and also adjust the settings for more automated driving.

In fact, behind this dashboard this is a fully multiplexed computer controlled electronic system, but it does not show off its sophistication. Instead, it looks like it has been designed for the more conservative US truck driver, there are no surprises in layout or feel.

The appearance of this interior does suggest that this is a truck which can be driven completely conventionally, but at the same time, there is a high level of automation and automated systems available to the driver if they wish to use them. On this test Dieseldecided to turn all of them on.