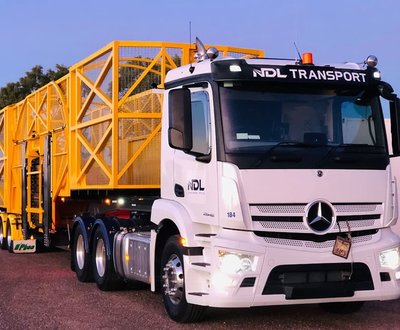 NDL Transport from Brandon in North Queensland has purchased five new Mercedes-Benz Actros trucks from Daimler dealership RGM Maintenance in Townsville after looking into the potential productivity of the model.

“We chose the Benzes because of their low tare weight, which gives us an additional 500kg payload for every single load,” said NDL Transport operations manager, Luke Zarb.

“With five trucks running all day every day, that extra 500kg on each run really adds up,” he added.

The trucks haul sugar cane from pads at the edge of local cane fields to railway sidings.

Both ends of the special cane trailers tilt up and the cane drops down into the middle before being pushed-out on a conveyer and into bins, delivering to any of the four mills in the Burdekin region.

Mr Zarb says the trucks, which have been on the road for three months, have been well received by the drivers. They appreciate the spaciousness of the cabins and the comfort levels: “They just love them,” he said.

“The guys reckon they are the smoothest and most comfortable trucks they have ever driven and many of them have been driving for 30 years,” Mr Zarb added.

The new Actros models also have a Multimedia Cockpit consisting of two large customisable tablet screens that present information in detail, giving the driver more control and information in a clear and stylish manner.

The new generation Benz AMT features a crawler function, which makes easing up to docks or bins easier than ever.

Like all Mercedes-Benz truck engines, the 11-litre unit meet Euro 6 emission standards, which are far stricter than the existing Euro 5 standards that are currently mandated in Australia.

“The fact that these engines are Euro 6 rated is a really big plus for NDL Transport,” Mr Zarb says.

“It is quite a simple way for us to reduce our impact on the environment.”

The Australian sugarcane industry has been working to reduce its environmental impact in recent years, making the Euro 6 Mercedes-Benzes a good fit.